“Nisekoi follows high school student Raku Ichijo, the son of a leader in the yakuza faction Shuei-Gumi, and Chitoge Kirisaki, the daughter of a boss in a rival gang known as Beehive. They unexpectedly meet when Chitoge hops a wall and knees Raku in the face. After she runs off, Raku realizes he has lost his locket which was given to him by his childhood sweetheart with whom he made a secret promise. After discovering Chitoge is a new transfer student in his class, he forces her to help him look for the locket. During the search, they begin to dislike each other.

Upon returning home, Raku learns that the Shuei-Gumi and Beehive gangs have agreed to settle their feud by pairing their leaders’ children. Raku learns that his girlfriend-to-be is none other than Chitoge. For the next three years, they must pretend to be in a relationship to maintain peace between the gangs. This turns out to be quite a challenging task, not only because of their hatred for one another, but also because Raku has a crush on another schoolmate, Kosaki Onodera, whom he secretly wishes was the girl who bears the key to his locket. Various developments complicate the situation, including Chitoge’s over-protective bodyguard, a female hitman, a girl who claims to be Raku’s fiancée, and the existence of multiple keys.”

There isn’t really much to say about this series, other then it finds a pretty cliched formula within the romantic harem comedy genre & goes Hell-Bent-for-Leather to stick to it.

Naturally, there are some changes to the formula, such as the central protagonist Raku not being caught in situations that make him seem like a pervert but still ends up in huge misunderstandings due to people not actually expressing themselves (which is actually an on going social issue in Japan & more & more in the West as well).

But the other hallmarks are all there within the harem structure: Chitoge is the tsundere who lashes out with violence when flustered but has a surprisingly sweet side to her, actually just wanting to be normal & fit in with her classmates (despite her mafia family); Kosaki is the sweet, quiet shy girl who has a distant crush on Raku but is too timid to say anything because she doesn’t want to be rejected or upset the status quo; Marika is the loud obsessive openly declaring her love whenever she can. The cast is rounded by the hitwoman Tsugumi Seishiro who gets easily flustered due to unknown emotions; Raku’s best friend Shu, who, because of his sharp observational skills, loves putting people in awkward romantic situations; and Kosaki’s stoic glasses wearing best friend Ruri, who’s constantly trying to push Kosaki into confessing to Kosaki into confessing her feelings to Raku, physically if necessary. 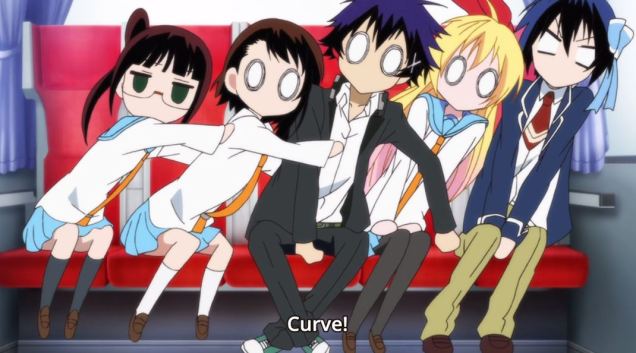 As the series progresses Chitoge & Raku going from despising each other to becoming friends & then maybe something more. This is mainly through Raku genuinely being a nice guy & helping her out whenever he can, such as with trying to make friends with others in the class (which is hard because she has more limited Japanese language skills yet speaks in a complex fashion). But this kind of development is pretty basic & by the numbers. Same with Kosaki slowly coming to terms with her own feelings & the introductions of other “love interests” as the series progresses. Because it’s part of an ongoing manga series, some parts felt rushed whilst others dragged out too long & they added some twists far to late for such an oddly episoded series (20 instead of the usual 24).

Well, since there isn’t much plot to speak of, let’s talk about the visuals for a bit.

Nisekoi, despite having two directors, has the visual fingerprints of Shinbo Akiyuki all over it.

Shinbo, a very prolific director, is most famous for his work on the Sayonara Zetsubo Sensei & Monogatari animes -which brought to the fore his more unique & disjointed visual style.

Nisekoi is stung by so many of Shinbo’s now cliched hallmarks. Such as how female characters clasp their hands behind their backs & twist around to talk to camera (a feat that is physically impossible), linger external shots, scenes absent of people, sharp contrasting colours, characters staring at each other from either side of the screen with the eye focussed on the empty space in the centre of the screen & random non-sequitur animations.

Shinbo does add some interesting little visual gags. Such as every spit-take being depicted by little puppetry like cutouts held up by sticks yet these are really dwarfed by Shinbo’s typical and grating visuals. 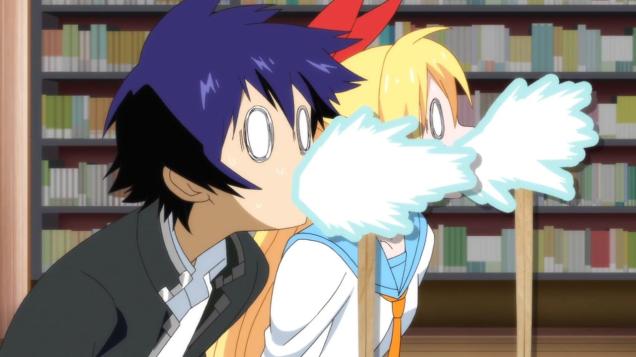 Everybody get ready as I get out the old whacking stick for that old bugbear: hypersexualisation!

From his work on Sayonara Zetsubo Sensei & Monogatari, both Shinbo as a director & Shaft as a studio have employed especially degrading & stupid ways to depict & look at female characters on screen. Usually these are just the camera focussing on clothed chests or thighs as skirts flutter above them but Shinbo loves having his female twist into impossible & suggestive poses as they spout long monologues to the point it almost becomes like a bloody fetish for the man. He seems to be the anime version of Rob Liefield in terms of hypersexualised poses but with, you know, actually drawing talent & that.

Yet every anime that Shinbo touches is visually pretty & interesting, even if the content is disturbing or stupid. The man really knows how to control the mise-en-scene as well as challenging what is perceived as typical anime style. It’s not for everybody but he does bring an exceptionally amount of visual polish & interest to Nisekoi, more so then his other 2014 production Mekakucity Actors -which is just a basic rehashing of all his tricks from Monogatari.

In the end, Nisekoi is an extremely competent & visually pretty if very cliched series but it does at least stand above your average pathetic harem series (coughOnigaisenseitwinscough). If you don’t have much else to watch, there are worse ways to spend your time. But they said the same thing about the waiting room of the STD clinic too.

4 thoughts on “It would only be 3 episodes long if they took out the awkward pauses – Anime Critique: Nisekoi”