Naru Sekiya is an ordinary 14-year old girl who likes fairy tales, but is worried about her lack of other interests. She has a chance encounter with a “fairy”, a foreign girl practicing dance at night. On a spur of the moment, Naru asks to join her and is introduced to the world of yosakoi dancing.

Hanayamata fits nicely into the Cute Girls Doing Cute Things subgenre, not dissimilar to the aforereviewed Gochuumon wa Usagi Desu ka from last season. The general gist of it is a group of early teenaged girls getting together in order to have fun, gain confidence & strengthen their bonds of friendship. I mentioned lesbians in the title because this series leans towards to the Girl’s Love (similar to Yuri but lacking the sexual side of things). Outside of paternal figures, there is an absence of males within series. & the girls show blushing cute attraction to each other that leans more towards extreme/deep friendship attraction than Sapphicism.

Also, unlike the aforementioned Gochuumon wa Usagi Desu, Hanayamata is less a situational based series than a driven narrative-based story.

The general thrust of the series is the shy Naru, who hides from everything & would rather lose herself in her fairytales, finding someone & something to give her the passion & confidence to face reality. Naru finds this through her encounter with the pixie-esque foreign girl, Hana N. Fountainstand, whom Naru initially mistakes for a fairy wanting to take her to a magical kingdom.

Hana is a pretty typical Weeaboo, who is obsessed with all things Japanese to the point that she wishes to reshape her entire cultural identity. Her primary focus is on Yosakoi, because she witnessed a dance trope when she was a little girl visiting Japan. Hana’s goal is to start a Yosakoi club at her new school & she has chosen Naru to be the first member.

Naturally, Naru’s painful shyness & extreme lack of confidence means that she refuses but Hana’s persistence & overall adorability means that Naru eventually offers to help set up the club. In order to do this, they need more members -who are often driven away by Hana’s over-eagerness- a supervising teacher & to get passed the very strict Student Council President, Machi. This driving arc is combined with the other protagonists: Naru’s overprotective & slightly self-centred friend Yaya & the epitome of Japanese feminine grace, Tami -whom Naru views as a big sister & princess-like figure. They both strive to find their own passions & dreams in the face of others trying to control their lives or people unwilling to push themselves to take that final step to break through the barriers before them. Machi finds herself in a similar position, wishing to overcome her sister-complex; a sister how just happens to be Sari (AKA Sally-sensei), the Yosakoi club supervisor -who only took on the role because of the pressure that Hana applied to her through begging.

Each character has to overcome their personal struggles in order to gain confidence. This is central to the construction of Naru, who thinks of herself as weak & lost yet it does not ring entirely true with her. Her emotional weakness & crippling lack of confidence seems to stem more from perceptions of social pressures & her indulgence in escapism rather than face reality. These unto themselves are hardly original ideas for media to explore but in the case of Naru they seem contradictory. That is because she claims to have no physical strength or coordination yet from the outset we are told that she’s practiced Iaido from a young age, having gained a high proficiency in the art from her father, who runs a dojo from their home. I found it strange that these martial art didn’t confer any ability to Naru’s confidence & dance motions but that may lie more in the schismatic nature of her personality then within her actual flesh.

With Naru occupying the space of the pitiable stalwart looking to overcome their own feelings of inadequacy, it’s up to the other girls to fill the other roles. Yaya is the typical tsundere who wants to be the centre of attention, especially from Naru, & is a little jealous that her friend has finally found something outside of her admiration for & reliance upon Yaya herself. Tami wants to be the epitome of the perfect woman, in order to gain her father’s approval but she also is shown to be a little ditzy & mischievous, looking to break the role that she’s forced herself into. & Machi wants to escape from the shadow of her once successful sister & conquer the feelings of abandonment that stem from her relations with Sally-sensei as well as the academic pressures that her hospital running parents are putting her through now that Sally-sensei has abandoned the role of heir to their tiny medical empire.

Whilst, so many other shows this season, Hanayamata is exceptionally beautiful look at. With its bloom & shimmering use of colours & well rendered action sequences -especially the dance choreography for both the girls & the passing troops. Yet, as a whole, it’s a series not without its faults.

My main criticism of the series that its aimed at boosting Japanese consumer & cultural confidence, but once again showing a foreigner entirely obsessed with an aspect of Japanese culture/history that they are willing to move & reshape their entire personal identity in order to conform to their perceptions of what it means to be Japanese. Hana fundamentally exists (at least in the anime) to push a form of Japanese superiorism, reinforcing the belief that Japan is the superordinate in terms of its ongoing cultural practices.

The other negative in my point of view is how they push the emotional drama side of things. Bringing out the tears & ramping up the reacting, coupled with some irritating voice acting at times. It isn’t a deal breaker but it detracts from the sweetness of the comedy & the beauty of the anime. Especially the expressions & the reaction shots. There is some mild sexualisation & fan service but that at least palls when faced with the drama & comedy.

Overall, this is a worth addition to the “Cute Girls Doing Cute Things”. It’s fun, it’s fluffy & silly but also deep & touching when it has to (but not in the yuri sense). Whilst it does have some negative, all the good that it does completely outweighs my basic (& typical) complaints. There are plenty of kawaii moments as well as other random comedic moments -such as with Yosakoi supply store owner Ofuna Masaru, who looks like a stereotypical Yakuza but is passionate about Yosakoi & helping the girls.

If you can get passed some of the minor irritations, you’re sure to enjoy this series. It’s a good balm to some of the bloody & hypersexualised offering this past season. It’s all about what you can achieve if you have self-belief & friends by your side to support you. More so if you push yourself in order to support them so you can find your own strength to face the harshness of reality. 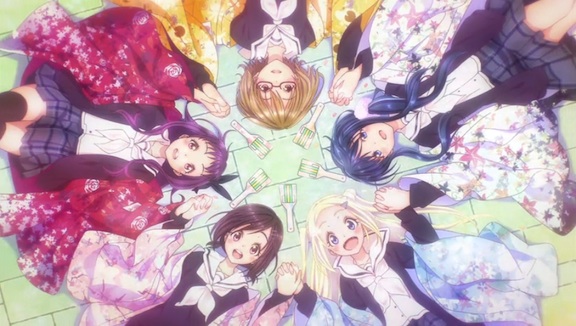 2 thoughts on “The All Singing, All Dancing Lesbian Troop – Anime Critique: Hanayamata”