Note: this article contains much hyperbole & such personal views. Wow.

Generally speaking, there are two ways that you can release a Collectable Card Game (CCG, another name for a Trading Card Game/TCG). The 1st is by going up with a fairly new & unique idea and then thoroughly play testing a new game; seeing how to break certain mechanics or cards, checking if any decks/cards/builds are completely OP & pretty much ensuring there is some semblance of balance before you release it.

The 2nd way is to find a popular media franchise, see how you can base a game around it & rush it out to capitalise on the popularity without putting it through play test, usually meaning the game is broken with poorly conceptualised rules & cards contradicting how things are meant to be played.

Unfortunately, the official CCG for the My Little Pony: Friendship is Magic franchise is of the 2nd school of CCG creation & releases.

The game is more broken the promises of your ex-boyfriend & not so much bent as it is a spiral.

OK, calling it broken is unfair. It is more that it is poorly balanced & not optimised to it’s full potential but these issues are being addressed by the makers with each new expansion release & the makers are working with the player community to address any questions or issues there are with the rules.

Many of the ideas the game are pretty much unique to it -such as Faceoffs & Troublemakers– yet they are so poorly optimised & explained that they are constant sources of argument & contention. The text on the cards are often poorly written, with no clarity as to how some of them are used or what their triggering conditions are (especially for some of the Mane character cards). They are plenty of screwy rules & confusing set ups in this game -so much so that many ex-players (& some heavily invested franchise fans) claim that these “broken” rules & mechanics began to drive players away from the game. Such people also claim that this was more so because the game wasn’t produced by fans (AKA Bronies) but rather by game makers not invested in the characters or morals of the cartoon.  Upon being pointed to better research, I stand corrected in the creators not being part of the fandom but it still means people won’t stop using the whole “evil corporation wants to take fans money” argument spilling out of so many mouths.

Yet, despite all of those faults, I do actually really enjoy the game. I enjoy playing (the rare chances I can find someone to verse), I enjoy collecting the cards & I really enjoy the deck building. All because it’s so unlike any other game that I play (with the possibly exception of Legend of the 5 Rings) & it forces me to think differently to how I play it. It’s too difficult to explain how to play, so shall let this video do it for me.

As you can, it’s a pretty odd & complex game, but that is one of the reasons that I really do enjoy playing. First off, let’s look at the Problem cards.

Since unlike games such as Magic the Gathering or Cardfight Vanguard, you don’t actually engage in combat, Problem cards are your means to setting up your Win Conditions (basically: reaching 15 points before your opponent does). Yet how you Confront a Problem can becoming confusing when it leads into the Faceoff & Double Faceoff turns. You score points for reaching the requirements printed on the card, which are the numbers on either side of it, as in the below example.

The dual colour symbols on the bottom represents what the cost is to the player whose card it is. Decks are almost always two colours (being based on the colours of the Mane 6 from the series: purple, pink, yellow, white, orange & blue), so by playing/setting or moving Mane or Friend cards who match the colour requirement, you can score 1 point. Whilst the opposing player just has to met the Power requirements equal or above the upside down number on the top of the card. If you are the 1st player to Confront the problem, you score the Bonus Points written on the card. The more difficult it is the for players to meet the requirements or beat the Problem card’s active abilities, the higher the Bonus you score.

Now, here is where it gets fairly frustrating for some players.

At least the method for resolving the Faceoffs themselves are very straight froward. You add up the total Power (the coloured numbers in the top right of the cards) of all of your cards facing both Problems before you Flip the top card of your deck. The term ‘Flip’ is rather useless & confusing. It would’ve been better if they just said “reveal the top card of your deck” instead. You add the Power from the Flipped card to the total of your cards on field & if you have a higher number than your opponent, you win. There are of course cards & abilities that grant you more power or other bonuses; such as scoring extra points, Flipping additional cards, dismissing or discarding opponent’s cards & so on & so forth. The scoring it all pretty straight forward for the most part & it also ties into how the turns are performed.

If you watched the video a few paragraphs above, you may remember it talking about how you Action Points. AP acts like your Mana if you were playing MtG but unlike Mana, your AP returns at the start of each turn & increases as you score more points. They also roll over each turn. So if you have 1 point left over & you get 2 AP at the start of your next turn, you’ll have 3 AP & so on. In an odd bit of balancing & forethought, your opponent will always have the same amount as AP as you, regardless of their actually score. So if one of you is ahead, the ability to play cards is always equal. This means you can get in some nice last game volleys by storing points & then playing lots of high cost cards, Troublemakers to prevent your opponent from Confronting problems or using your AP to draw a few more cards per turn.

The challenge of the game lies in anticipating what your opponent may do as well as trying to lay down a good opening gambit with the limited resources that you have. Because cards such as Troublemakers are played face down & stay that way for your turn (unless you have other cards or abilities to let them be flipped right away), you can set up strategies well ahead of turns to hinder or shatter your opponent whilst they try to do the same to you. The fact that you can stack Troublemakers also leads to some pretty far thinking strategies.

How you build & balance your deck is also vitally important.

You need a minimum of 45 deck cards (Problems are always limited to 10 & have their own deck & you’re only allowed to have a maximum of 3 of the same card in either decks) to play but if you run anything past 70 or so cards, you run into the standard issue of inconsistent draws & having to discard cards from your hand once you go over the 8 card limit. You also need a balance of 2 colours, with one colour leading towards which ever Mane you prefer to use. The pre-built Starter Decks tend to come with two Manes with similar abilities that represent each colour of the SD’s theme but sometimes it’s better to build your own decks so you get a better feel for the game. 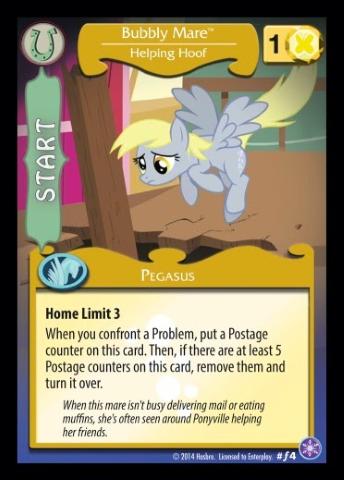 I’m currently running 3 decks: A modified Special Delivery theme deck (because Derpy is your cross-eyed muffin eating goddess!), one of the new Unlike Duo decks (because Fluttershy is the best waifu) & I’ve got a self made Purple/White deck based around the giant Twilight Sparkle: Friendship is Magic card that came with the Fat Pack. The latter deck is my most played because the Twilight Mane card is so easy to flip (play two different colours on a Problem & she flips) but her Flipped ability is pretty useless for the most part. My Derpy deck is a great one because of how it juggles the yellow Critter Friend type with a card that allows for unlimited Critters on the Home space (where cards go once Problems have been resolved with Faceoffs & are limited to X number of cards based upon your Mane’s unflipped/flipped state) but getting Derpy into her Flipped state is a confusing mess, taking ages to get done.

Compared to the other dozen TCG stuff that I play, my win/loss ratio in the MLP CCG is stacked more on the win side but, I have to be honest, most of them are chalked up to exploiting dodgy & ill-written rules & general confusion of what we had to do. Still, it’s a game that keeps me playing & genuinely keeps me interested.

As I’ve harped on throughout this Hands On Critique, this is a very unbalanced game but that doesn’t stop it being fun. In fact, the latest expansion, Absolute Discord, relies on the fact that much of the game is broken & exploits it even further with wacky card effects & abilities -which I think is a nice touch but doesn’t get them out of fixing the balance for all future releases.

In the end, I play this game because it is so different from the combat driving styles of other TCGs. It appeals to my more cunning &, frankly, underhanded nature to use cards to completely throw off my opponent’s game but at the same time help them with mechanics & understanding the rules so we can both enjoy the game more.

It’s far from perfect but the pre-built decks are very affordable & once you get the complex basics under your belt, the bouts go along at a good pace.

We also have regional matches coming up soon, so I hope that I’ll be in town for the local ones where I currently am. Last year only one person attended, so she got all of the prizes. So, if I slash a few tires, I might walk out a State Champion! Because prizes are better than friendship! 9 thoughts on “We Still Need To Love All the Broken Ponies – Hands On Critique: The My Little Pony: Friendship is Magic Collectable Card Game”