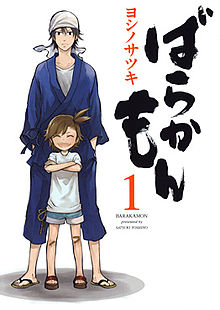 Seishu Handa is a pro calligrapher, despite his young age. When the elderly curator of an exhibition criticizes his calligraphy for being too unoriginal (“like a copybook”), Handa gets angry and punches the curator. In the wake of this faux pas, his father sends him off for a retreat on Goto Island, near Kyushu. There, he meets the colourful villagers, interacts with them, and begins to learn.

Barakamon more or less follows the typical Japanese reaction comedy formula. You have one or two baka (idiot) style characters, saying or doing outrageous things whilst the straight man reacts, either with vocal outrage or a burst of slapstick violence. Barakamon doesn’t attempt to break this mould in terms of routine but it honestly doesn’t have to. This is because it’s also a situational comedy as well as a fish out of water story. Yet all of these cliched comedy tropes do nothing to detract from the actual humour within the series.

That is because the comedy is based in the location as well as the fairly unique characters or usurpation of trope. With Handa-sensei (called so because he’s master of a skill, not really a teacher) acting as both straight-man & foil to his own embarrassment created punchline. He’s an excellent dichotomy between the confident artist & the neurotic self-critic. Unable to control his impulses & always pushed to his limit by those around him -especially the tomboyish 6 year old Naru, one of the locals of the island he finds himself living on after his exile from Tokyo.

This form of comedy thrives on an ensemble cast, each existing to provide a contrast to the protagonists or set up punchlines for others to trip over -usually in the form of an outlandish reaction or over the top verbal outburst. The humour has to be fast paced & the reactions to extreme for the situation, so the series is filled with both quick punch jokes or slow boil scenarios -both of which work exceptionally well.

Yet, as mentioned in the first line of the previous paragraph, it is the characters that surround Handa-sensei. Primary to this group is Naru, the aforementioned little tomboy, who instantly latches onto Handa-sensei because he’s entirely new to the island. Most of her humour is derived from her either trying to get his attention or trying to cheer him up when he makes himself depressed over his lack of progress -both of which usually results in him getting physically injured or scared by her. Despite his outward antagonism towards the little girl, he shows genuine concern for her & plays along. Partially out of concern for her but mostly because he spend all of his childhood practising his calligraphy he never got to play like other children.

There are other characters too, who had to the humour or Handa-sensei’s frustration -like the mischievous girls Miwa & Tamako- or take on the role of straightman to the lunacy around them -such as Hiroshi & Tamako’s younger brother, Akihiko. Out of the four, Miwa & Tamako get the most screentime, since Handa-sensei’s house used to be where they secretly hung out & they are unwilling to let that go. Whilst Miwa does more on screen, I personally found Tamako a lot funnier as a character. She wants to become a manga artist, drawing brutal Shonen stories. She’s also drawn to BL/yaoi manga but denies this since she doesn’t want to be labelled as a fujoshi, or Rotten Woman, but is always imagining Handa-sensei being in love with Hiroshi because Hiroshi cooks for the calligrapher in exchange for some lessons. This usually leads to Tamako having huge outbursts at Handa-sensei whilst trying to subconsciously pair them up.

The series isn’t all frenetic sight gags & slapstick. In between the heavy paced comedy the series gets to show off some beautiful visuals, the ocean & landscapes of the island -all of which go to inspire Handa-sensei in finding his new unique style. Like so many other series this season, the visuals for so many incidental details are topnotch. The sparkle of the sun upon the sea, the dappled shade as light filters through the leaves. They’re not as great as in say Glasslips but they are pretty speccy to look at. Naru’s varied expressions are also adorable, even when they’re referencing some other obscure (in the West at least) works.

If I were to critique (which I am doing anyway) one major drawback of the series, it is that it doesn’t really break any new ground & a few themes & characters are introduced a touch late. Mainly Handa-sensei’s overprotective mother, Emi, who resorts to outbursts of physical violence (beating her fists up & down) whenever she gets frustrated. Her husband & son naturally are able to shrug these off but Handa-sensei’s best friend & manager, Kawafuji Takao, is unable to do so -copping a real & humorous beating from her when he makes fun of her overprotective nature. Kawafuji himself is a well rendered foil for Handa-sensei’s demanding ego & neurosis but similar finds himself out of his depth when he ventures to the island to see his friend. There was a lot of potential for more original humour & ideas there but it all fell back into basic ideas of community & belonging. With Handa-sensei coming to feel that the island is the only place that he can truly be happy because everyone accepts him for who he is, not because of his prodigious talent as a calligrapher.

In the end, this is a very fun, sweet & silly series that, despite not breaking any new ground, is definitely worth the time to watch. It has a playful sense of humour that uses good callbacks to earlier gags, especially in the post credit coda scenes. It is visual exceptionalness beats any drawbacks that the plot might have. Plus it doesn’t have many gags that are restricted to limited cultural & media references that only the most hardcore cultural otaku would get. A great series to watch when you want a sweet pick-me-up or just to laugh your manboobs off with.