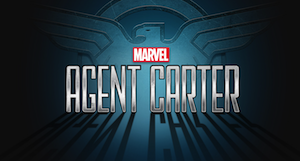 “In 1946, Peggy Carter must balance the routine office work she does for the Strategic Scientific Reserve (S.S.R) while secretly assisting Howard Stark, who finds himself framed for supplying deadly weapons to the top bidder. Carter is assisted by Stark’s butler, Edwin Jarvis, to find those responsible and dispose of the weapons.“

When you have a tightly focussed & structured narrative universe like the current Marvel cinematic one, it’s hard to fit in side stories that parallel & enhance larger narratives that play out within a different media space (i.e. movie to television). 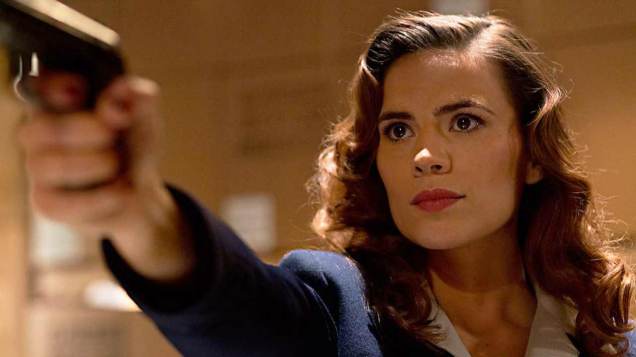 That was pretty much my issue with the MCU TV line’s 1st show, (Marvel’s) Agents of S.H.I.E.L.D. because it had to adhere to a timeline structured between several movies (mainly after The Avengers & then fitting in overlaps from both Thor: The Dark World & Captain America: The Winter Soldier). This meant that the narrative & scope was fairly stunted because it couldn’t create story conflicts with the larger (& more important) cinematic universe. Agents of S.H.I.E.L.D. has always been hampered by what it could & couldn’t do & whilst it has been able of late to break out of the MCU constraints with it’s own storylines it’s still tied into the larger idea of the Inhumans & that new movie franchise (since Fox owns the rights to Marvel’s Mutants).

Agent Carter is fortunate in that it does not have to adhere to a myopic narrative structure but it is still trapped within a much, much larger structure which limits what it can do.

The 1st limit is the big one: Captain America -both the 1st film & the character himself.

Even though the series is about Peggy Carter & her search for purpose & meaning in a world after WW2, everything is still set in her relation (& failed relationship) with him. This hampers both the overall story -because things have to be references to a world after Cap’s supposed death- & the character of Peggy herself, because she’s only really framed in terms of references to Cap. Even though he’s not a physical presence within the series, he basically affects all of Peggy’s motivations, as she does actions in regards to what Cap would do or think.

This is something that is constantly put to her by other characters, such as members of the S.S.R (which is an odd choice of name considering that the Cold War was rolling in) & her friends from the war, like Howard Stark & the Howling Commandos. Peggy isn’t really allowed to be her own woman, she’s always Captain America’s other half. This idea is quasi played with a meta-radio play within the series that has Peggy’s character dumbed down to a field nurse & Cap’s love interest always being rescued & always played juxtaposed against Peggy enacting her own agency (as in: kicking someone’s head in).

It’s not that she’s a bad or shallow character, she’s just reactonary. 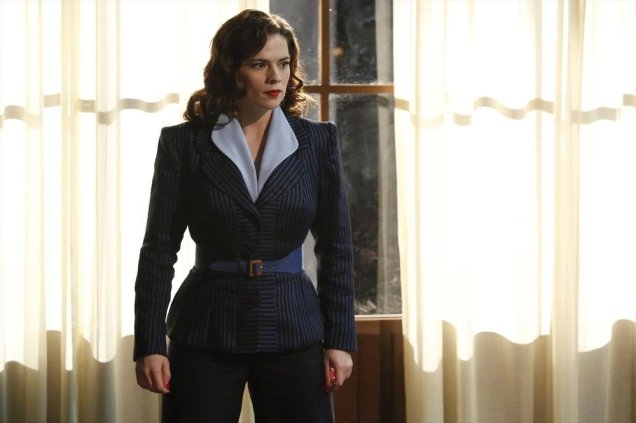 She’s always reacting against what others think of her how how they treat her (such as her S.S.R. colleagues turning her into the office tea lady & disregarding her years of combat & field experience) or against expectations of the time (her role as a woman in Post-War USA) or even reacting to the hidden villains’ plans. She has agency within the narrative but she’s never really enacting. Her motivation is to prove herself to her male chauvinist colleagues & proof her worth as an agent but that’s still a reaction. Same with how she chooses to socially & personally isolate herself in the 1st few episodes of the series -this is a reaction against losing Cap & her general experiences during the war.

That is not to say that Peggy Carter is robbed of all development & action, it’s just framed poorly in terms of development. Always leaving her on the backfoot & behind. Done well, this can create great tension in the story but it’s not deftly done her, leaving some parts -such as the threat of the various villains- feeling rather flat. It speaks too much of how poor Hollywood is at depicting female characters who do not fit within comfortable moulds & stereotypes. Even when empowered that they still have to fit typical feminine rolls of love interest, daughter, sister, et cetera as well as fitting the physical form of societally accepted beauty (see Buffy the Vampire Slayer for some examples of the empowerment-disempowerment dynamic & the superstrong Barbie Doll).

Yet, despite this reactionary form of agency, this is actually a very well put together show.

This starts with strong performances of the central characters of Hayley Atwell as Peggy Carter, James D’arcy as Jarvis (Howard Stark’s long suffering butler) & Dominic Cooper as Howard Stark is what holds so much of it together becuase of the natural yet conflicted chemistry that they bring to their individual roles. I think because they are all British actors with a diverse range of past roles they seem to perform better than their American counterparts (who do come off as fairly 2 dimensional). Add to the mix the other great British actor Ralph Brown as the nuanced Dr Ivchenko, you have a great front line cast.

It does help that Hayley Atwell is so gorgeous!

That’s not to sexualise or trivialise her in any way but she just has this dominant presence upon the screen where she just conquers all of your attention. She really inhabits the role, the struggle for acceptance & reacting against a society & occupation that just wants to keep her down. She also twists these expectations, knowing that everyone underestimates her she can do and get away with what others can’t. Her outer & inner strength shine through but she still needs support from friends.

This does lead into a character who was wasted & inconsistent: Jarvis.

James D’arcy plays him brilliantly but he’s so weak & wishy-washy in terms of his depiction despite having a strong & determined back ground. He exists almost solely as the Yank’s idea of the stiff upper lip Brit servant who has been a fixture of pop culture since the 1st World War. Jarvis is shown as having great fortitude & determination yet is so weak & easily yielding, lacking physical presence & abilities that Peggy has in abundance but this is in direct contradiction he was in the British army & has been trained to fight (according to his & Howard’s own words at least). That all given, D’arcy plays Jarvis with aplomb, giving him little gestures & habits that endear him to the audience -especially when he talks about his equally love suffering wife & their history together.

The other cast members are a bit of a mixed bag, with many of them not getting any development beyond stock misogynistic G-Men. There are some hints of things deeper, such as with Chief Dooley & how he views Peggy as someone who needs to be protected because of his estrangement but this is pretty much thrown out of the window in order to ramp up the tension & bring the S.S.R. together.

Yet the biggest thing that truly annoyed me about the series is how they didn’t connect it to the larger Golden Age period of Marvel Comics. There is a swathe of classic characters they could’ve referenced & used -such as the hero Angel. They could’ve connected a lot of the superpowered heroes back to the Captain America Supersoldier projects that spawned many other fictional heroes (which in turn can be used to explain superpowered individuals within the larger MCU).

That aside, Agent Carter, despite (or because of) it’s short run stood out amongst all the other superhero TV adaptions of the past few years. It has rich visuals, fairly good acting & a focussed core story (for the most part) without resorting to many choking tropes of TV series (ships in bottles http://tvtropes.org/pmwiki/pmwiki.php/Main/LockedInARoom, et cetera).

Hopefully it will get a 2nd series that expands the past MCU a fair bit & introduce other classic characters. Plus more Hayley Atwell on screen is always a good thing.