“The 4th progenitor—the world’s strongest vampire who should only exist in legends. Accompanied by twelve Familiars and spreading calamity, this phantom vampire appeared in Japan. For the observation and obliteration of the Fourth Progenitor, the government and Lion King Organization decided to dispatch an attack mage known as a Sword Shaman. However, for some reason, the one chosen for the observation was an apprentice Sword Shaman girl, Himeragi Yukina. Wielding the strongest anti-progenitor spirit spear, Yukina arrived at Demon District, Itogami City. What is the true identity of the Fourth Progenitor, Akatsuki Kojou, she encountered over there?!”

And that’s what we get with the Supernatural Shonen Ecchi comedy series Strike the Blood.

This series started at about the same time that KILL la KILL did & I didn’t really know anything when I first watched it. The first episode was decent but still riddled with cliches but what do you except? It’s very hard to produce entire new ideas & it does come from a fairly popular Light Novel series?

Anyway, the plot resolves around Akatsuki Kojou, a once human who was turned into the most powerful vampire known as the 4th Progenitor through mysterious means. This garners the attention of the Lion-King Organisation, who sends the powerful & obedient, but very naive, Himeragi Yukina act as his observer in case he goes out of control.

Due to this being a world where magic & monsters are known & have been given their own territory where they can freely interact with each other as well as normal humans, Yukina gets involved in a fight with vampires, causing Koujo to reveal his powers to her as he steps in between them. From there the general plot follows Yukina & Koujo coming to terms with not only the immense power that dwells with Koujo but also there feelings for each other.

I stuck with this series because the first half was very well constructed, with nice little story arcs that build upon the last & develop the various characters, main & side, in small ways. Unfortunately it falls apart a bit in the 2nd half (eps 14 or so onwards) because there isn’t really any developments to be made. Just more female characters added to stir up the fan service & harem angle as well as setting up plot threads that will go unanswered because is doubtful it will get another series. 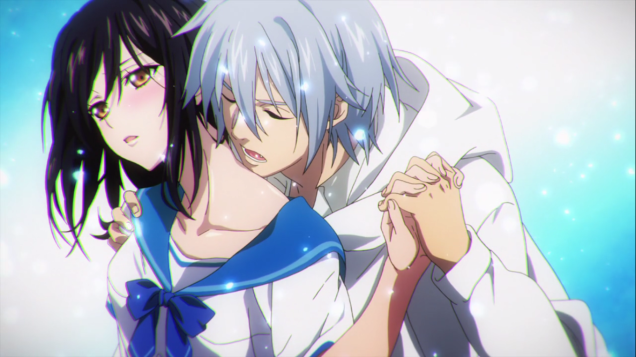 One of the major problems is that it is so cliched & spins up all the stupid ecchi, fan-service stuff. It plays out a lot like IS: Infinite Stratos in many ways. The ignorant male lead always being protected by those stronger than himself, so he fights to justify his masculine position even though he keeps getting his stupid arse kicked. Which means he struggles to control his power but also means that he stumbles into situations that make him look like a pervert & no one listens to him when he tries to explain, so he gets his arse kicked again.

& his stupid, stubborn need to protect everyone despite his own lack of skill seems to rev the motors of all the ladies around him, so they flock to have him drink their blood, which fuels his powers.

At least that’s a fairly interest an angle but having ecchi activated powers isn’t all that new in an anime. The whole slightly perverted protagonist who gets caught in compromising situations that get blown out of all proportions is one of the most common & annoying Shonen genre Light Novel tropes -usually it’s innocently picking up panties (again: see IS: Infinite Stratos). This plays into the whole idea that “a kiss is pure & innocent, only to be done with someone special” but “hey, here’s a whole heap of underage tits bouncing around. Enjoy & feel no hypocrisy in it!”

Anyway, enough bagging, let’s get into more serious discourse. With some critical kicks from the side.

Basically, what does make the series good is the tightness of the first half. You get several small story arcs, usually 3 to 4 episodes per arc, that actually progress the story & character development while setting up future plot points & arcs. Like your typical Shonen work, each new challenge requires more power/strength to overcome &, while getting that power is often more Deus Ex Machina, it actually has some logic to it. What’s actually unlike typical Shonen stuff is that the female characters, whilst being hyper-sexualised, still have their own sense of action & agency. They aren’t sitting around waiting for Kojou to save them, though they are always happy when they do, but always performing actions that will either prevent disaster or protect those they love.

The best example of this is the character Aiba Asagi, the resident computer expert. In fact, she has a supernatural power over computer systems & is considered the Demon District expert on it all -to the point she was once kidnapped due to her talents. Whenever something bad happens -& it always does- she will do anything to see the Island & Kojou (her unrequited crush) protected, even if it means putting herself in danger.

More often than not, even though it is Kojou who defeats the BBEG of the arc, he wouldn’t be able to do so without the female characters. Who either save his stupid arse or provide him with the blood needed to activate his magic powers & thus destroy the ultimate enemy of the arc.

In the end, Strike the Blood isn’t anything new to anime as a whole. It is riddled with cliches & annoyances but does stand above many others of its ilk because of the focus of its stories & the characters within. Unfortunately, possibly due to its source material & translation, a lot left out in terms of background info & development & the 2nd half of the series doesn’t feel as good or refined as the 1st.

It’s not a bad thing to way really but nothing I’d say you should go out of your way for. The blu-ray will be uncensored if you are into that kind of thing. It’s pretty much for genre fans or those who like what I call annoying Fan-Service but it does have some merit in terms of Female Agency, which I’d like to see picked up more in other series (but minus the jiggle factor).

The Terrible Thing – a children’s poem

I really should have it illustrated & published one day.