“5 years ago, the 200 year war between the alliance of six nations and the Gaz Empire comes to an end when Emperor Arthur Gaz, the Immortal Emperor of the Gaz Empire, is finally killed by eight warriors known as the Eight Heroes. After the war, the Empire’s lands were divided by the alliance who later formed the Council of Six Nations to bring peace and order to the land. In the present, Toru Acura is a former Saboteur who lives with his sister Akari. Toru is unable to settle in this peaceful era as his Saboteur skills are useless and sees no meaning in his life. While out foraging at the forest, Toru encounters Chaika Trabant, a white haired Wizard with a white headband and a coffin, saving her from a man eating unicorn. Seeing their skills as Saboteurs, Chaika hires Toru and Akari for an important task; to steal the remains of Arthur Gaz from the Eight Heroes.”

I’ve detected a trend in this season of anime (other than sexual assault & the hypersexualisation of underage girls) & that’s that pretty much all series that I’ve seen so far seem both rushed & drawn out.

That is to say: they seem to skip a lot of important character & background development, rushing through so many what should be crucial foundations to understand & enjoy a series yet they get bogged down on certain scenarios or tags of information, devoting too much time what isn’t really important or using vital time to dangle plot threads that might never get resolved within the span of the series. 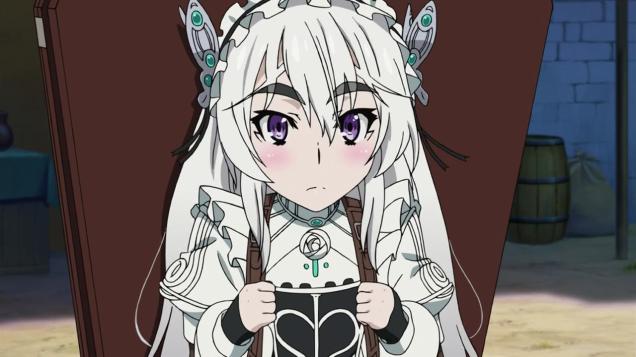 I really wanted to love the anime of Hitsugi no Chaika, I truly did because the universe is full of amazing ideas & details. Almost all of which are skipped over & then we are hit by a huge chunk of background at the end (leading into a 2nd series in October). This is very particular to the primary characters, Toru, his adopted sister Akari & the titular Chaika.

I genuinely wanted to know Toru & Akari’s backgrounds, especially their roles in the last days of the war. What we are left with is unexplained info, just showing Toru as a moppy spod longing for the action & mindlessness that the war provided whilst Akari is rendered too much like Mikasa from Shingeki no Kyojin -in that she’s a total bro-con who is obsessed with protecting & deferring to Toru despite being the better of the duo (’tis a pity that she lacks Mikasa’s bitching abs). At least Chaika is supposed to be mysterious with trickled out development but they tend to rush over what should be crucial emotional development of the character.

You see, Chaika claims to be the daughter of the Wizard-Emperor Gaz (or Good Old Gazzah to his mates) yet that affirmation is constantly called into question by those who seek to stop Chaika in regaining the magically imbued pieces of the Emperor’s body that were taken by the 8 warriors who killed him. Primary to counter her claims are other Chaika’s, who look similar to her in terms of face but the two others seen within the series (referred to as Red & Blue Chaika) have differently rendered bodies. Yet all have silver-white hair (denoting supernatural connections) & scars around their necks like their heads have been severed. This confrontation of the self should cause an ideological & psychological schism & in most others (darker) series this would carry a lot of the internal action yet it’s pretty much brushed over in favour of focussing on less important things (in my opinion at any rate).

Similar rushed development can be seen in the erstwhile antagonists, the Post-War Kleeman Agency (similar to Section III from Pumpkin Scissors but with a cat-boy instead of a tank killing super-soldier). I think it took about 3 episodes before I learnt their names & what their goals were. They appeared at first to be agents of violence, under the command of the driven & uncompromising Captain Alveric Gillette, seeking to stop Chaika through any means they can but as the series progresses you see that they are more a desperate group trying to stop a return to a war that could destroy the world. Again: I really wanted to know more about them & how they came to be formed. Especially the cat-boy Leonardo, who was supposedly created as a tool for war. His backstory should have naturally parallelled with Toru & Akari’s, who come from a village who’s only function is to produce Saboteurs to fight in the once endless (200 year long) war. There should have also been parallels drawn between the driven nature of Gillette, who is willing to do whatever he must to ensure a stable peace, & Toru, who is so willing to give up his agency as a human & become a tool for Chaika to use just to feel as though he is of some use. 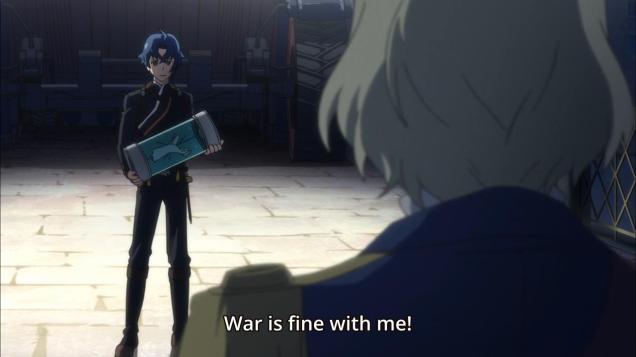 The strengths of the series though lies in its fairly original use of magic & technology. Wizards are actually a form of sniper or riflemen, who use weapons called Gundo to channel spells. Since these often take a bit of time to set up, they either do this from afar or under the protection of mid or close range fighters. The spells that the Gundo can cast range from complex attack formulas to silencing spells to producing simple light sources. The Gundo, & all other magical technology, are powered by Magic Fuel which is produced from fossils because it relies on memories & trauma to convert thought into energy. In a pinch, a Wizard can use their own memories to operate their weapons or vehicles but they can’t select which memories to use.

The nature of the magic & the technology of this world is fascinating but under-explained in the series. With a lot of exposition being dropped on you in the last three episodes, where supposedly major antagonists are brought into the fray yet they basically do nothing. The idea behind their floating fortress was pretty cool but under played & developed.

The other plus of the series are the numerous action & battle scenes, where you see Toru & Akari in full effect. They are both agile combatants, leaping & dodging as well as throwing blades in the midst of close quarters conflict. Akari is more of th powerhouse that Toru, wielding a spiked hammer whilst Toru has twin blades with wires hidden in the pommels, allowing him to escape or entrap opponents. Both the siblings also use what is called “Iron Blood Transformation” which heightens their abilities & lessens any pain felt -although there are some logically inconsistencies in their use but that stems from the lack of explanation. The Red Chaika also wields a Snake Sword to great visual & battle effect.

Visually, the series is pretty fantasy standard. Not as flashy as it could’ve been, not as visually dull either. There is an odd thing with the blood in the TV broadcast being toned down so it’s a weird browny colour & the series does get pretty bloody towards the last few episodes. Nothing to complain about but once you notice it, you can’t stop seeing it throughout.

One last complaint & it is pretty petty but I DESPISE the fashion in which Chaika (& Red Chaika) speak. It’s a clipped broken fashion where so can only say the most basic form, usually object & action without any joining words. So, if she wishes to express her belief that Toru is safe she’ll say “Toru, safe!” or similar such thing. Yes, it’s a petty petty gripe but enduring 12 episodes of it is pretty annoying. Plus I do DREAD how they’ll render her speech in the eventual English dub.

I’m genuinely hoping that they put more development into the upcoming 2nd season because there is so much to otherwise recommend the series. I managed to read a few chapters the manga adaptation (originally a Light Novel) some months back, so my expectations were high for the series. Yet it is still highly original in parts with interesting visuals. I will make my usual criticism of the hypersexualisation of a (gothic) loli character (the main Chaika) as well Akari’s cleavage always being on display but it seems like a moot point right now. The Blue Chaika is also hypersexualised but she’s depicted as an adult with a loli’s body rather than a child or teenager (unlike so many other series this season).

This is one that I’ll leave up to you, the reader, to make a decision on -especially if I am right or wrong about the rushed yet dragging nature of the series. I dig have high expectations coming into the series, so that would’ve affected my opinion somewhat but as long as you, the reader, likes it, it’s all good.